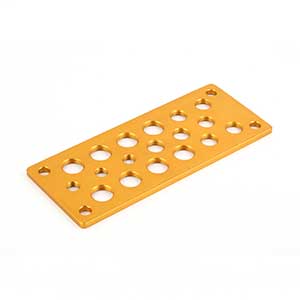 There are many anodizing treatment methods for anodized aluminum plates.

Classification according to the form of current:

Effect: It can shorten the production time to the pulse of the required thickness. The film is thick and uniform. And the corrosion resistance is significantly improved.

According to the electrolyte:

According to the nature of the film:

Q: What is the anodized aluminum sheet?

A: Anodized aluminum plate is a plate made of raw material aluminum plate after finishing. and then forming a protective film on the surface through anodizing process.

Q: how to anodized aluminum plate if the hole don’t need anodization ?

A: Before the aluminum plate is used as the anode. We use a suitable rubber plug to tightly block the hole, so that the anode plate will not reach the hole during the anode process.

Q: where can u buy 1/8 inch thick anodized aluminum plate?

A: For the aluminum plates in inch sizes, we usually look for suitable suppliers on the domestic B2B platform. If we do not find them, we will go to the international station platform to find the suppliers with the right price.

A: Anodizing will make the part size smaller. The anodizing pre-treatment of aluminum alloy will go through sandblasting, alkaline etching, chemical polishing and other treatments. Which will make the substrate smaller.

Also, if the oxidation treatment has undergone a heavy film removal process. The substrate has become smaller, and the film removal corrosion. Such as the use of alkaline film removal, will further affect the size of the finished product.

Q: how to anodize aluminum？

A: Explanation of terms of anodizing process flow Mechanical and chemical surface treatment Metals need to be polished or brushed, then degreased and degreased. And the quality of appearance is checked to prepare the surface for next processing procedures.  Anodic oxidation forms a thick aluminum oxide film, that is, anodized film, by the means considered. That is, the oxide film is adsorbed. This is a prerequisite for adsorption coloring. Ⅲ dyeing deposits dye molecules in the micropore structure of the anodized film. Ⅳ Seal the pores to seal the fine pores, so that the dye is fixed in the oxide film

Home About Us Products Advantage Honor News Contact Us